Beauty is in the eye of the beholder!!! Real beauty lies inside…
Money is not everything in the world!!! There are other things which are more important that money

When was the last time when u heard/made these random statements ??Probably when someone wanted to show sympathy to you right? Or probably to someone whom u wanted to indirectly say that he/she is ugly.. am not sure if its happens elsewhere..but we as Indians are very keen to sympathize with close ones…or for that matter anyone and everyone…

The questions remain how many of the times we genuinely feel what we say? Am sure more than half the time when we try to sympathize someone by saying something..deep inside we feel otherwise..

Want to share a real funny incident which happened

One of the weekdays I had met up with couple of friends of mine from college..and as lazy as I am..I asked them to plan the meet near my office…

When we 3 met , during our chat we felt out that one of friend (girl) was not in her best mood…so the other friend of mine enquired as to what was the reason for her foul mood…

The girl replied: Iam chumming and its my second day…that’s why the mood swings..
The guy replied : trying to sympathize with her…”I know how you feeling”
My reaction: DUDE REALLY?????? How ,when???

No sooner the girl heard that…she took his case left right and center….Was one helleva incident..i mean poor guy was doing it in good faith..so he would have never thought this would backfire in such a way..

My only advice is whenever u try to console someone….make sure you choose the right words and the right response…don’t just say things for th sake of saying….if you do so- you know SHIT HAPPENS :-P..
Posted by Rakesh at 5:17 PM 18 comments:

How does one identify what exactly is Spirit of Mumbai?

You ask that question and ten heads will turn around and say the fact that Mumbaikars turn to work the very next day of a natural calamity/ terrorist attacks shows the real spirit of Mumbai. A true Mumbaikar according to them is truly buoyant.

News Channels and print media too make most of it by talking about how these things doesn’t hamper the spirit of Mumbaikars and how life returns to normalcy even after something like a 26/11 attacks.

One thing that I fail to understand is “do we really have a choice to stay back at home after such calamities”. I am sure that 9 out 10 would say “NO”. Like us, many of them are more worried of the fact that they will get penalized for not showing up at work – especially if other colleagues turn up. It’s natural for people to move on with their life because if they don’t do so, they would not be able to survive in the city.

Ya I know this is more valid to corporate stooges and that still there are ways in which you can take a day off…But what about people who work on daily wages? Do they really have a choice? If you look at the facts I am sure we will find people who are comfortably tucked into a safety blankets are people who will talk about SPIRIT of MUMBAI.

People say calamities like this shows how people go out of their way to help others. I agree to their views, but deep down inside I am also aware of the sheer helplessness of ordinary Mumbaikars in the face of terror attacks. And that is why we help others hoping that in case we ever becomes a victim of such tragedy there will be someone to help us.

And why aren’t we penalizing the media? they are people who provide free PR for the terrorist…Check the front page of DNA new papers the very next day of the recent attacks and I am sure you would have also been as perplexed as I was- they had an image of a person who was lying down in a pool of blood..during the recent bomb blasts.

Their justification was they wanted us to face the reality…By humble request to them “please do not make us face such hard realities of Life … we are happy without own small world…” … Day in day out Mumbaikars see enough things which shows us the real Mumbai.

Please next time when you talk about spirit of Mumbai think of the people who have lost their life….

Well after almost a year long break...let's see if i continue blogging via nexus

"Best of FIVE "Well that's the slogan the most of the school students are saying now..

These 11 days of January 2010 has seen a lot of teen suicide cases and most of them as per various sources are due to exam pressure..

We thought after all this the education ministry would look into the type of syllabus and try to make it more interesting...but i think our dear ministry had some other plans..so what do they do...
they plan to introduce best of 5 system for 10th std board exams..where in the students have a chance to omit one subject from their syllabus of 6 subjects..now if you ask me..i really don't understand the logic behind this..

As per them this will help reduce stress and fear about tough subjects and students will be able to attempt exams without any pressure also.Oh ya forgot to tell you the main thing ,the ministry also i guess assumes that by introducing this system they will curb the suicide rate in teens..

My first reaction was WTF...what are they trying to do...

I mean are we trying to build a future wherein students will grow and face the tough world or are we making them into people who will run away from pressure and stress?

By bowing down in front of such things are we indirectly inviting more trouble in future?

I am sure there might be better ways to see to it that the stress on students are reduced...but i am sure this is not the right one
Posted by Rakesh at 12:46 AM 6 comments:

Bob works hard at the plant and spends two nights each week bowling and plays golf every Saturday.

His wife thinks he's pushing himself too hard, So for his birthday she takes him to a local strip club.

The doorman at the club greets them and says, 'Hey, Bob! How ya doin?'

His wife is puzzled And asks if he's been to this club before.

When they are seated, a waitress asks Bob if he'd like his usual. And brings over a Budweiser.

His wife is becoming increasingly uncomfortable and says, 'How did she know that you drink Budweiser?'

'I recognize her, she's the waitress from the golf club. I always have a Bud at the end of the 1st nine, honey.'

A stripper then comes over to their table, throws her arms around Bob, starts to rub herself all over him and says,
'Hi Bob Want your usual table dance, big boy?'

Bob's wife, now furious, Grabs her purse and storms out of the club. Bob follows and spots her getting into a cab.
Before she can slam the door, He jumps in beside her.
Bob tries desperately to explain how the stripper must have mistaken him for someone else,
But his wife is having none of it .
She is screaming at him at the top of her lungs,
Calling him every 4 letter word in the book.

The cabby turns around and says,
'Geez Bob, you picked up a real bitch this time.'
Posted by Rakesh at 11:18 PM 8 comments:

Well i always followed that particular funda until 3 weeks back..It was one small trip to tattoo shop with my friend which prompted me to get myself inked.. 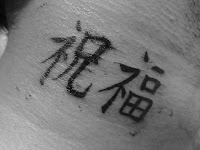 At first when i went to the shop and the desire of getting a tattoo emerged I thought it might be and temporary one...but i was proved wrong...

The same day i started thinking as to what would be the significance of my first tattoo and there i was with the answer...I always believed what ever happens will happen for good as it is god who has already chalked down our life...So i had no second thoughts and decided it would be "BLESSED" yes that is what my tattoo would say...

It is my belief that god's blessing is always there with me which prompted me to go ahead with this word. Any trust me people this is one spontaneous decision that iam really proud of..and really happy too :-)

Attaching the images do lemme know wat you think!!
Posted by Rakesh at 4:10 AM 9 comments:

A reminder from God!!!

Had a a very tough last week....had my exams.As if the tension of exams was not enough,we had our MET dept putting us in catch 22 situation...

The all hyped cyclone which was supposed to hit Mumbai shores never came[not that i wanted it to come and destroy]..But the news spread havoc all around...thanks to which our exam on that day got postponed...and we had to spend one more day cramming like hell.

Any ways done with exams i really wanted to loosen up and get away from the books...so we went to Carter Road[People from mumbai may know wat iam talkin bout] Its just to place to relax....

So we were sitting on a wall facing the open sea and i could see a lot of people around...Some jogging,talkin a strole,couples but there was this kid who really caught my eyes and my mind...he was happy walkin with few biscuits in his hand...It was very clear that he was one of the slum dweller...

Walkin pass people suddenly he fell down and all his biscuits fell from his hand...That kid was in all tears.His sister who also may be around 5 yrs came running picked his up..that kid got up picked up the fallen biscuits and went ahead...
When i saw this it really pinched me and reminded of all those times when we have taken things for granted and not appreciated the small things that god has blessed us with...

It was like a reminder that God gave to us saying understand the imp of things that you have...
Posted by Rakesh at 3:54 AM 6 comments:

Rakesh
I am both etherial and compassionate, with a wisdom not born from the intellect, but drawn from the residue of memories held close in my heart. I am dreamers ; yet am greatly moved by the sorrows of a struggling society.Exceptionally refined, and greatly offended by anything coarse and uncouth, preferring to live in a world of dignity and peace.

Love is so Confusing ---you tell a girl she looks great and what's the first thing you do???

TURN OF THE LIGHTS

Genuine thoughts can communicate before it is actually understood